Tahereh Pazouki has always loved maths. “It is not just about doing equations – it is a problem-solving technique based on logical thinking, which is useful regardless of whether you want to be an engineer or an artist.” Her passion brought her to Luxembourg in 2012 to do first a master’s degree in computer science, and then a PhD in psychology focusing on the development of cognitive skills among young children. One outcome of her doctoral studies was Magrid: a pedagogical programme for improving the development of early visual-spatial, cognitive and mathematical abilities for 3-9-year-olds, including those with special education needs. 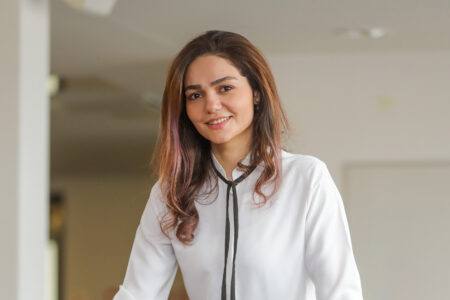 To develop Magrid, Dr Pazouki drew on her combined skills in software engineering and psychology. “I wanted to understand why some children have difficulties learning and provide a practical tool to help them improve their cognitive skills, especially in maths,” she explains. “When testing it in schools in Luxembourg, Germany and France, we saw not only that the children’s maths skills improved significantly, but also that they gained new confidence in themselves and their abilities.”

This is very relevant in Luxembourg, where 63% of children are not familiar with Luxembourgish when they start primary school.

The main distinguishing feature of Magrid is that it is completely language free and independent of any language requirements, making it accessible regardless of where the children come from and what languages they speak. “This is very relevant in Luxembourg, where 63% of children are not familiar with Luxembourgish when they start primary school. It is also useful with the rising number of international migrants,” she comments. “However, native speakers too improve their results when working with Magrid, and the tool is successfully used for children with special education needs: hearing deficiencies, autism or Down’s syndrome, for instance. Teachers use it to understand whether the difficulties a child has with performing a certain task is linked to the actual activity or to a lack of understanding of the language used.”

As soon as Dr Pazouki’s research study was published, requests started coming from teachers all over the world who were interested in the solution. As a consequence, she founded the company Magrid in September 2020 with the incubator of the University of Luxembourg as her base. She also joined Luxembourg’s start-up acceleration programme Fit 4 Start, which provided both seed funding and intensive coaching.

Our American team member says he could never imagine that such a small country would provide such great support.

“The administrative procedures at the very start were a bit heavy, but once the company was created I have found the start-up ecosystem extremely helpful,” says the Iranian-Luxembourgish entrepreneur, who claims that she came to Luxembourg a bit by accident but now considers the country as her home. “Wherever I went, they all wanted to help me – Luxinnovation, the Chamber of Commerce and even Luxembourg’s ambassadors abroad. Our American team member says he could never imagine that such a small country would provide such great support.”

In less than two years, the Magrid team has grown to almost 10 people with paying clients in two different countries and more on the way. “Magrid is available in all public schools in Luxembourg as well as for groups of children in Portugal. We are right now further expanding our market in Portugal and to the UK and the US,” says Dr Pazouki. This is only the beginning: she wants to reach further in terms of geography, add more features to the digital education tool and grow the team even more. “I also want to show people that you can work with maths in so many different ways – and have fun while doing it.”